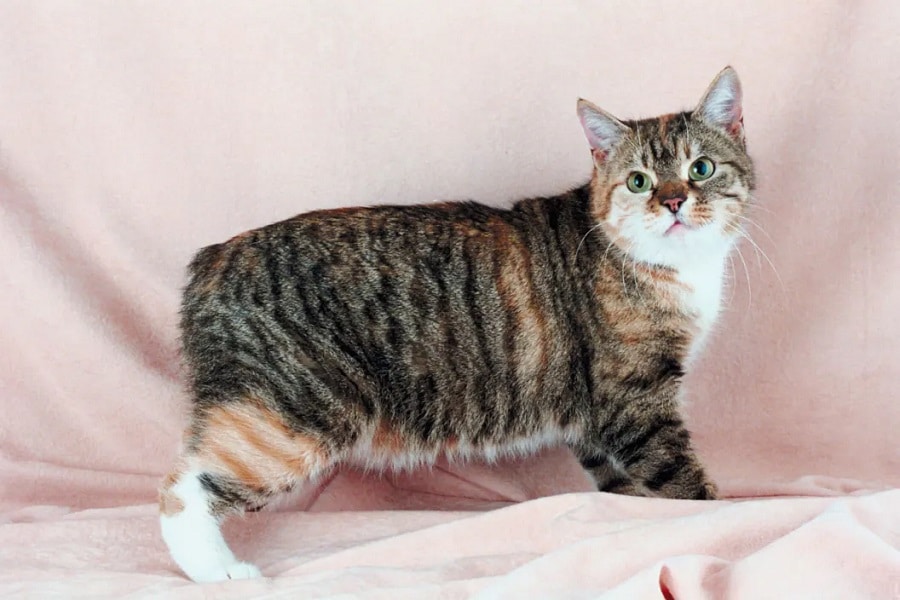 The Manx is a medium-sized cat with a round head, round eyes, round whisker pads, and a round rump. Manx cat breeds are unique in that they have a short tail or be tailless, have a short hair coat, or have a long hair coat. Because a tailless female Manx cat can give birth to a Manx with a tail, the length of their tail is determined by genetics. Manx cat coats come in a variety of hues. These are fantastic pets. They are sociable, affectionate, agile, and like playing. In the Manx Gaelic language, the tailless cats were referred to as stubbing.’ The personality of Manx cats varies from one another.

Manx cats have long been prized for their hunting abilities and are thought to be gregarious, friendly, and active cats, despite their lack of a tail.  The breed is intelligent and has a playful demeanor; they are social cats who are devoted to their families. The Manx is frequently described as “dog-like” in their devotion to their family and their desire to play. 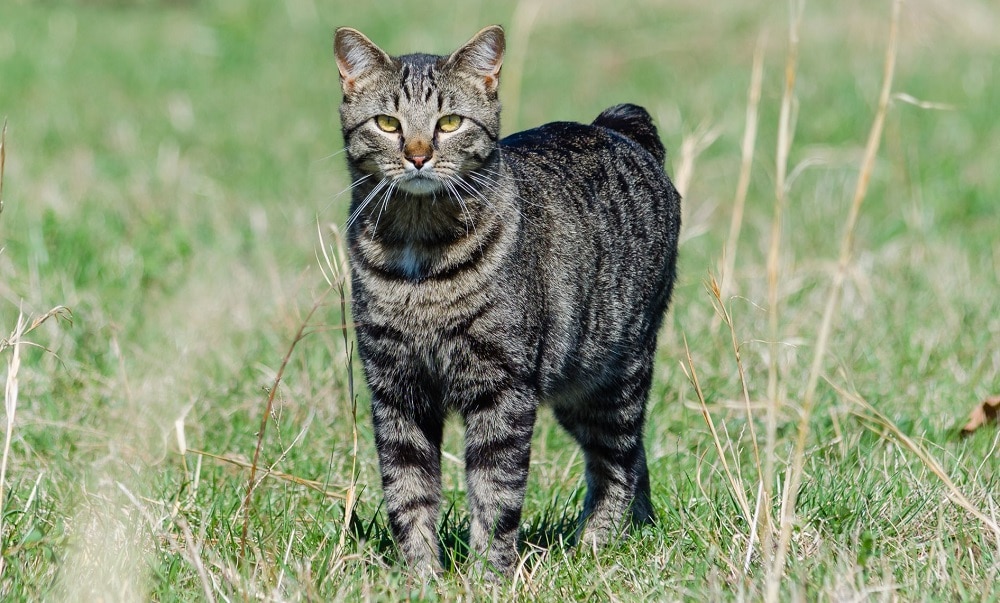 The Manx’s movements and general appearance have been described as “rabbit-like.” This cat breed frequently walks with both hind legs moving in unison, giving him a bunny-hopping stride.

Manx fur is thick and double-coated, making them not just good shedders but also water and cold-tolerant. All-white coats or color-pointed Manx are the rarest, whereas orange, tabby, and tortoiseshell are the most prevalent.

Long-haired cats with the same genetic composition as short-haired cats do exist. It’s a point of contention how they’re treated. The Cat Fanciers Association (CFA) states that the Manx can have either a long or short coat, however, all of them are shown as short hairs regardless of coat length. Long-haired cats are classified as a different breed by other regulating bodies in Europe and Asia, known as the Cymric. 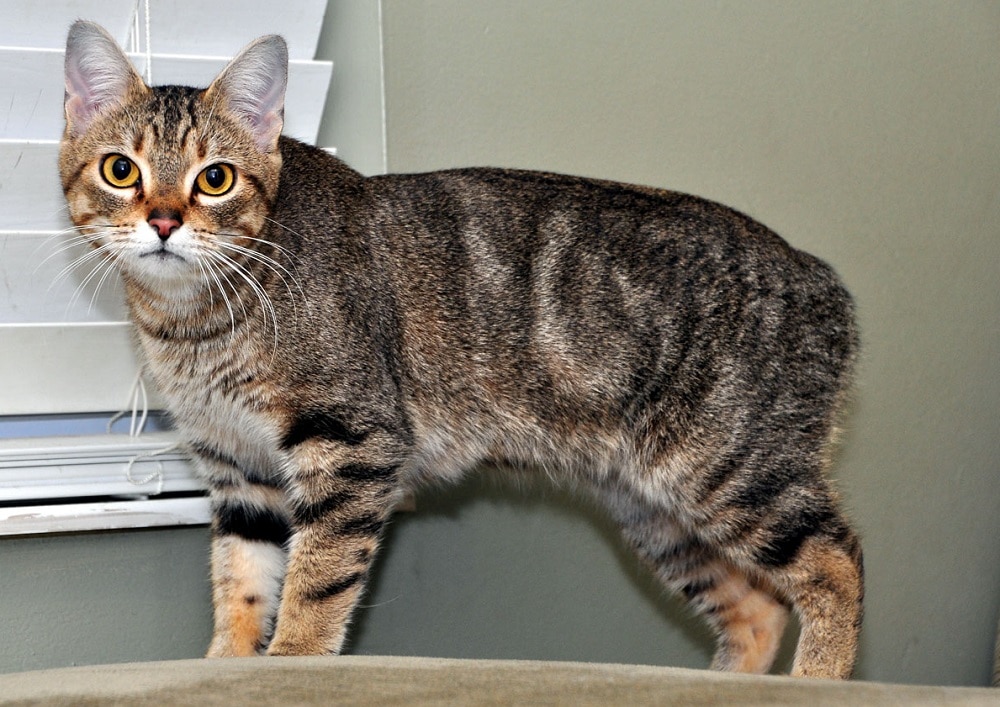 When raised, this medium-sized cat weighs 8 to 12 pounds and feels very heavy. The Manx takes a long time to mature, and he may not achieve full size until he is five years old. 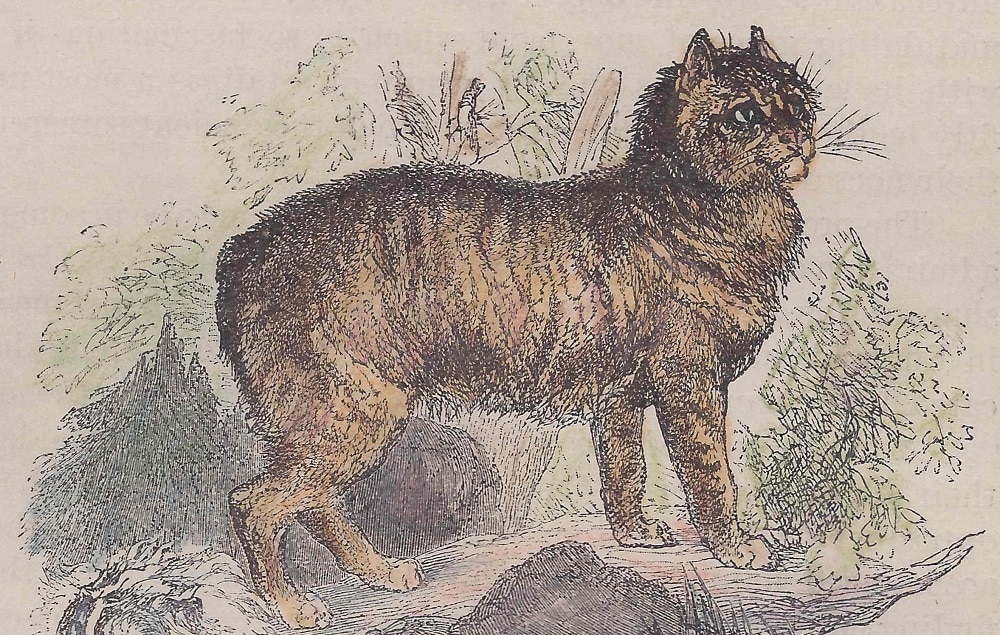 Although their exact origin is unknown, reports put the Manx in the 1750s or later. The breed could have started in the Isle of Man, off the coast of the United Kingdom, or a tailless cat could have hitched a ride on a ship to the island and transmitted her genes there. 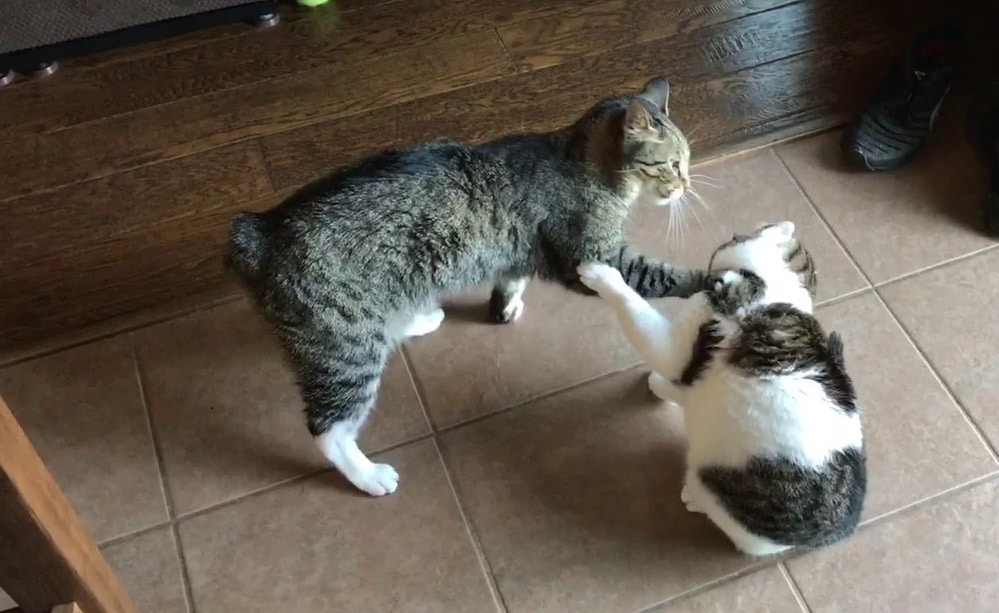 Despite the physical challenges, the Manx’s personality is undoubtedly the foundation for the breed’s popularity. Cats from the Isle of Man make excellent companions. They’re bright, fun-loving cats who manage to communicate effectively without swishing their tails. Manx are known for their strong bonds of devotion and loyalty to their chosen humans, and they like spending quality time with them, whether it’s sitting next to them in silence or racing around the house after a tossed sponge ball or whirling feather-tufted toy. Because of their muscular back legs, Manx are great jumpers.

They get along very well with other cats and well-behaved dogs, and they like romping with them. They are usually very kind, despite their lively nature. They make wonderful pets for families with children because of their playful yet docile personalities. They are enamored with water, which may originate from their origins on a small area of land surrounded by the water. 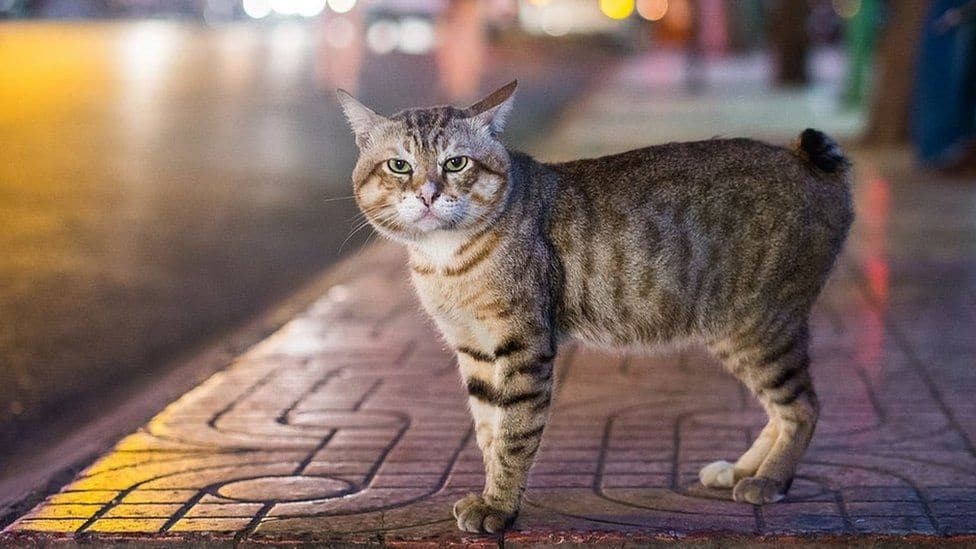 The Manx is a laid-back cat with a lovely temperament. They are faithful to their family groupings, often following their favorite humans about the house, despite having a strong independent nature.

Manx are also well-known predators, having served as ratters on ships of various sizes and being sought by farmers for their prey drive and ability to pursue larger prey such as rats and voles. 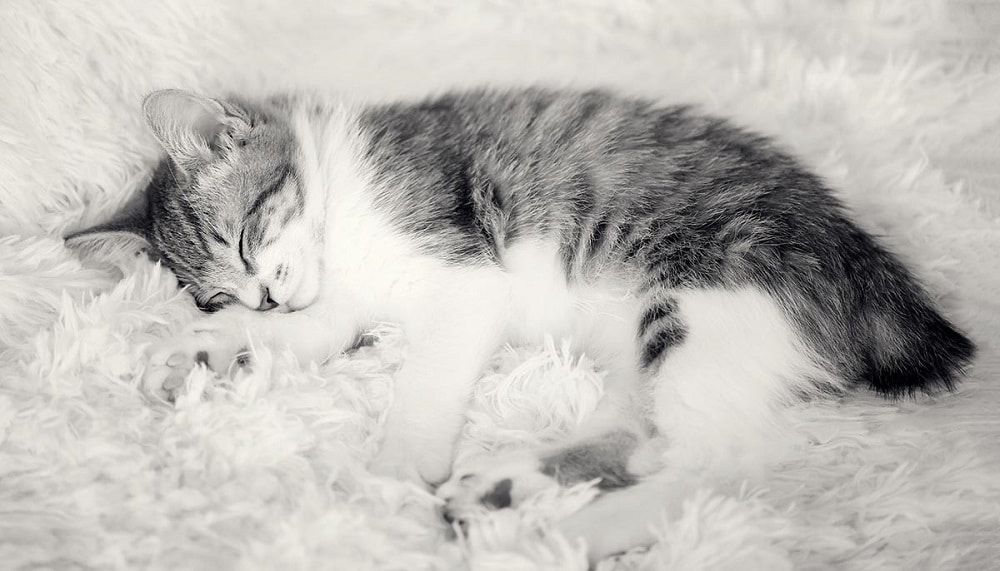 The Lifespan of Manx cats is very less when compared to other cat breeds. They can only live for 8 to 14 years. 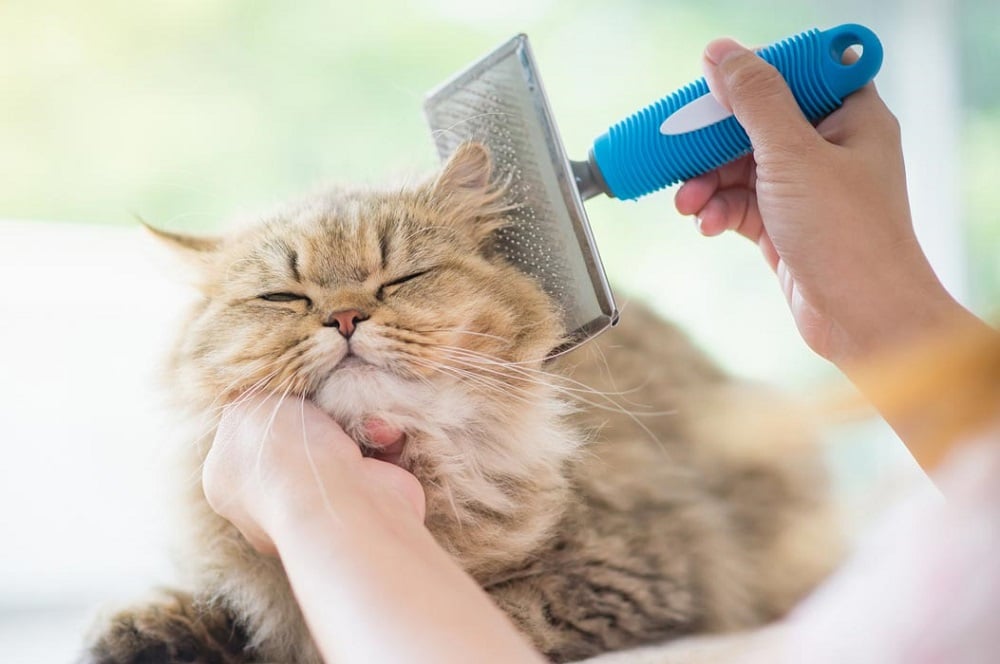 Both pedigreed and mixed-breed cats have different levels of health issues that could be inherited. Manx are typically healthy, but they have been known to contract the following diseases:

Q. What is the cost of the Manx cat?

Q. Is every Manx a tailless cat?

A: No, not at all. When it comes to tails, the Manx has four levels: Rumpies have no tail and typically have a dimple at the base of the spine, where the tail would be. Rumpy Risers have a knob of the tail that connects to the spine and consists of one to three vertebrae. The tail of a stumpie is a small stump that is usually kinked or twisted. Longies have tails that are nearly as long as the average cat’s. Rumpies are the most prized in the show world.

Q. Where Can I Adopt or Purchase a Manx Cat?

A: It might be possible to find a purebred Manx cat through a local breeder, but if you’d prefer to adopt from a rescue group, go to: 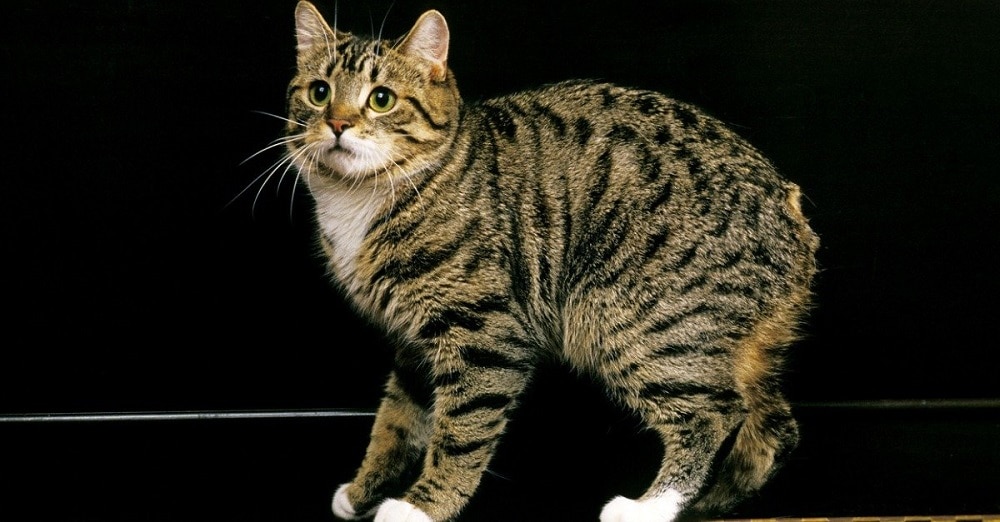 The Manx cat breed can be a fun addition to your house. They have amazing personalities in addition to having a unique and distinctive tailless body. The Manx is a low-maintenance breed that is easy to train. They don’t have any unique food requirements, and grooming is simple. We recommend Manx cat if you are looking for a pet.