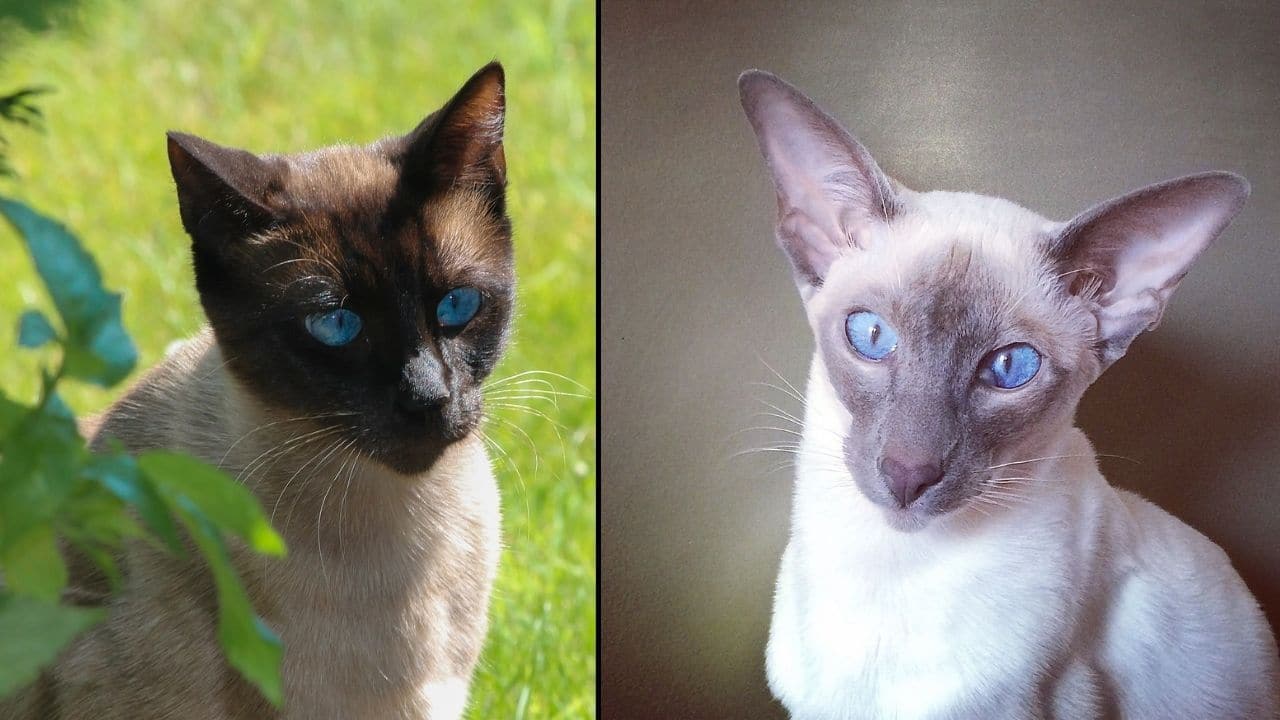 Siamese cats are widely known worldwide for their pointed coats, distinct vocalizations, and deep blue eyes. They are one of the most popular cat breeds that people want to have as a pet at home. These cats are originally from Thailand, formerly known as Siam.

Today there are three types of Siamese cats and they are known as:-

The biggest visual distinction between these two Siamese breeds is their distinctively shaped heads. As the name implies, the Applehead has a large, round head and a large, muscular body, which is normally larger than the Wedgehead. Their eyes are also a little rounder, and their tail is a little shorter than the Wedgehead’s.

The Applehead, also known as the Traditional Siamese, was the first breed brought over from Thailand in the late 1800s, and it had been that way for decades. These cats were said to possess intelligence and magical abilities, and they were used to greet members of the royal family. The beautiful look of these cats and their unique body marking has made them famous in the US after their first arrival. Since their arrival, these cats have spread and flourished widely throughout the nation.

The Applehead Siamese possesses many of the breed’s personality characteristics. Although they are known as the quieter Siamese variety and are not as vocal as the Wedgehead variety, they are affectionate, intelligent, playful, gentle, and vocal. These cats are natural attention seekers and will crave attention throughout the day. When left alone, these cats can become depressed easily. This is why many Siamese cat owners and breeders advise having two Siamese cats rather than one.

Although Applehead Siamese cats are active and playful, they are not as playful as their Wedgehead counterparts, preferring to spend the majority of the day on their owners’ laps or the sofa.

Apple heads, like all Siamese cats, are highly intelligent and easy to train. Siamese cats are commonly regarded as having a “dog-like” nature and temperament, and they are generally easy to train because they prefer to be as close to their owners as possible. Positive reinforcement techniques are ideal, and it’s best to start training as soon as possible to avoid developing any bad behaviors. Balls, fetching sports, lasers, hide and seek, scratching posts, and climbing trees are all excellent ways to keep them active.

Their coat is short and smooth. Daily petting and stroking are normally sufficient to keep their coat clean, but brushing once or twice weekly will aid in the removal of any dead fur.

The Applehead Siamese is a more stable variant of the Siamese breed than the Wedgehead Siamese. They have a much longer life span than most other cat species, reaching up to 25 years in extreme cases. They don’t have any major hereditary health conditions, but they are known to have eye problems like glaucoma and progressive retinal atrophy.

The Wedgehead Siamese is the newest of the Siamese breeds, and it’s a show favorite. Many registries and breeders refer to the variant simply as “Siamese,” even though it is a rare and severe version of the classic Siamese. The Wedgehead Siamese has a distinctive wedge-shaped head, as well as a muscular body, long legs, and a long thin tail.

Wedgehead cats are very active, vocal, and affectionate cats. They are, like all Siamese cats love to seek attention. These cats prefer to be with their owners and can develop separation anxiety if left alone for an extended period.

Wedgehead Siamese breeds like most Siamese cats are very caring and affectionate, and their relationships with their families are almost dog-like. They prefer to be curled up on their owners’ laps or as close to them as possible and have been known to follow them around the house.

This breed is more active than apple head Siamese cats. They are easy to train and they love playing with toys. These cats have incredible stamina thanks and muscular bodies, and they’ll love climbing on a cat tree to get above the action.

Grooming these cats is easy, and a light brushing once or twice a week is enough to get rid of any dead hair. Unfortunately, the Wedgehead Siamese, more than any other Siamese variety, is susceptible to a variety of health problems.

Because of the unusual shape of their heads, they have less room for teeth to develop and are more susceptible to dental problems, so they may need to brush their teeth regularly to maintain dental health. Because of their triangular heads, these cats are more prone to kidney and heart disease, as well as respiratory problems. Although they may live as long as other Siamese breeds due to the above issues, some may only live for 8 years.

What makes them different from each other?

While the Applehead and Wedgehead Siamese both are Siamese breeds, they still have few differences in their physical characteristics. Both have similar personalities and make excellent family companions who are quick to train and gentle and welcoming with small children.