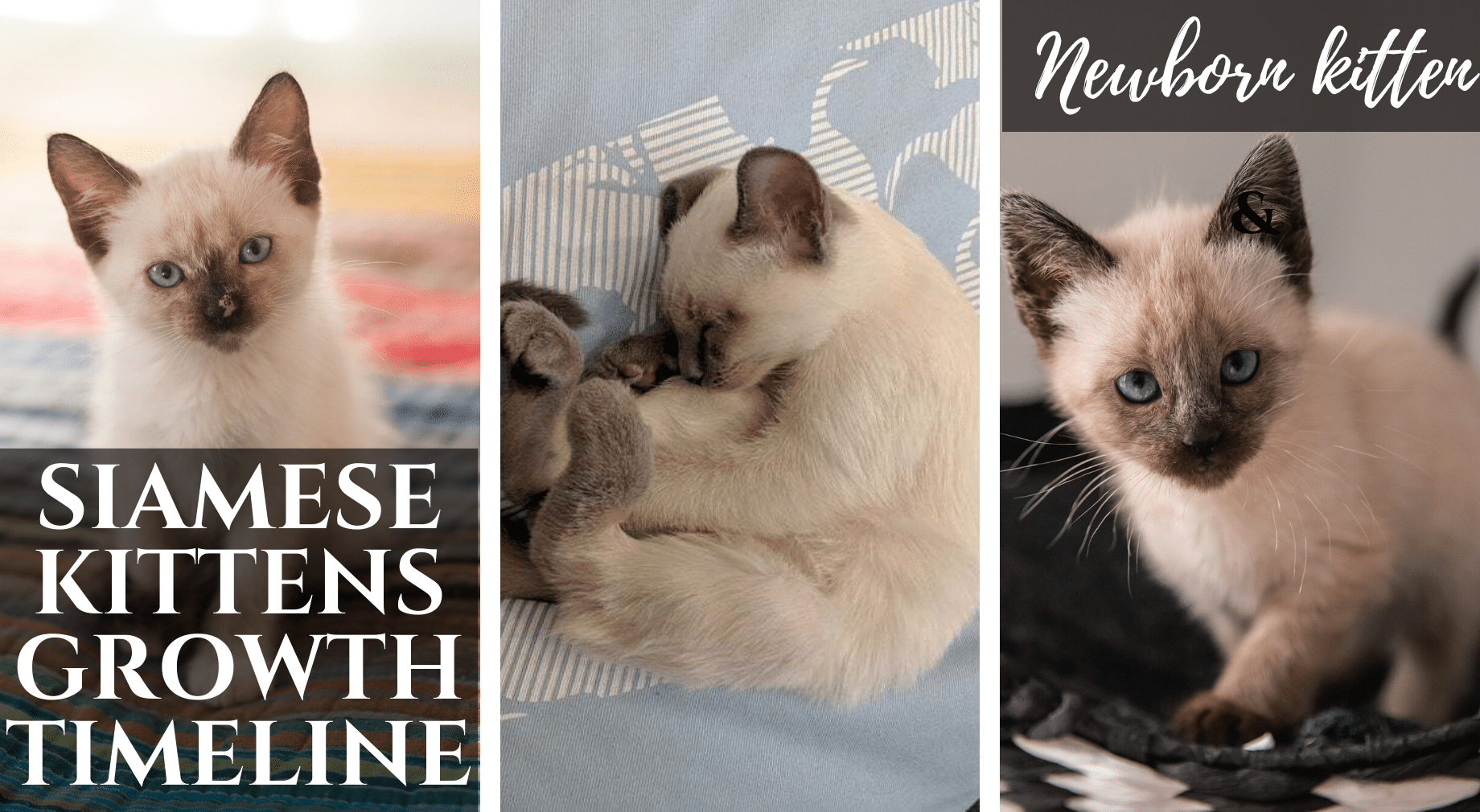 Due to the distinctive features, the Siamese kittens can be easily recognized. Intelligent and friendly breed, the Siamese has a lot of energy and loves to hover around its favourite human. as taking about Siamese kittens Growth Timeline, The Siamese kitten is born completely white and as they age, their coat colour starts to darken. If you plan to get a Siamese at home, then go in for a kitten. You get to see its development and the various changes that take place both physically and behaviour wise.

Today, let us go through the growth timeline from a Siamese kitten to a grown-up adult.

Just like any other kitten, the Siamese kitten is also born with its eyes shut. Its ears would be folded over. Hence, at this stage, your Siamese kitten would not be able to see or hear anything.

This makes it difficult for it to get around hence it would only be able to wiggle around a few steps until it finds the tummy of his mommy and starts latching on it. The kittens are born completely white and by the end of the first week, you would notice just a few hints of adult colour present on its ears.

As the days’ progress, the kitten starts gaining some weight. In the second week, the kitten can now gradually open its eyes and see the world around. There is also development in their smell senses. It would start to learn to purr from its mother.

By this time, the kitten will gain some strength in its legs and you may see them crawling around a bit. There is continuous development in the third week as well. Their weight would be double of what it was when they were born. Their ears now perk up and would seem bigger than their tiny head.

In the third week, you would notice some adult colouration on your kitten. It has been seen that the colouration in blue point and seal breed Siamese develops sooner than the lilac or the chocolate ones. But the complete colourization would not appear until they complete one year of age.

Their teeth also start to appear by the third week. The mother cat starts teaching her kittens some good toilet habits. She would start to lick the genital area and bottom of the kitten for stimulating evacuation. In this process, they also have taken in any waste products. The mother cat continues this process until the little ones start to wean off and their waste now is solid like.

This is the time when the little kitten starts exploring the surrounding area and starts getting active and playful. Their teeth continue to develop. The mother cat would start leaving her kittens for a longer duration even though the feeds would continue in between whenever she is present.

The eyesight and hearing sharpen by this time and they would prefer to roam around freely rather than staying inside the box. There are some kittens who would start to wean off and shift to solid foods instead. Compared to kittens of other breeds, the Siamese kittens take some time before they start accepting solid foods.

By this time, the kittens are less dependent on their mother and rely more on solid foods. At the end of the eighth week, the kittens completely wean off. Around 5 weeks old, the kittens start behaving more like a tiny adult cat rather than a helpless newborn kitten.

By the time, they reach the eighth week you would be able to notice clear colour points even though it would be lighter than the adult version. At this stage, it is important to begin human contact so that they understand the importance of socialization.

This is the age wherein the kittens are full of energy and they start to have their own personality. They would love to explore their environment. This is the right time to encourage human contact gradually so that they understand the world better.

They start getting used to all the strange noises and people around them. Do not leave the kittens unsupervised else they would get into some kind of trouble. It is the time to take your little one for vet visits and get some vaccinations done.

The kittens are now bolder than their infancy stage. You can easily compare them with the child aged three to five years. By the time the kitten attains 12 weeks, it should have received its second set of vaccination for flu and enteritis.

At the age of 13 weeks, the kitten is all set for leaving its own little nest. They are now individual personalities having their own set of traits.

The Siamese can now get around easily once it has attained six months. By this time, they no longer look like a kitten. Instead, they look more like adult Siamese.

As they age, their activities mellow down. By the time they reach five months, it would gain sexual maturity. Until the Siamese attains two years of age, they are not considered to be an adult. The body temperature is known to dictate on how dark their body colour would become.