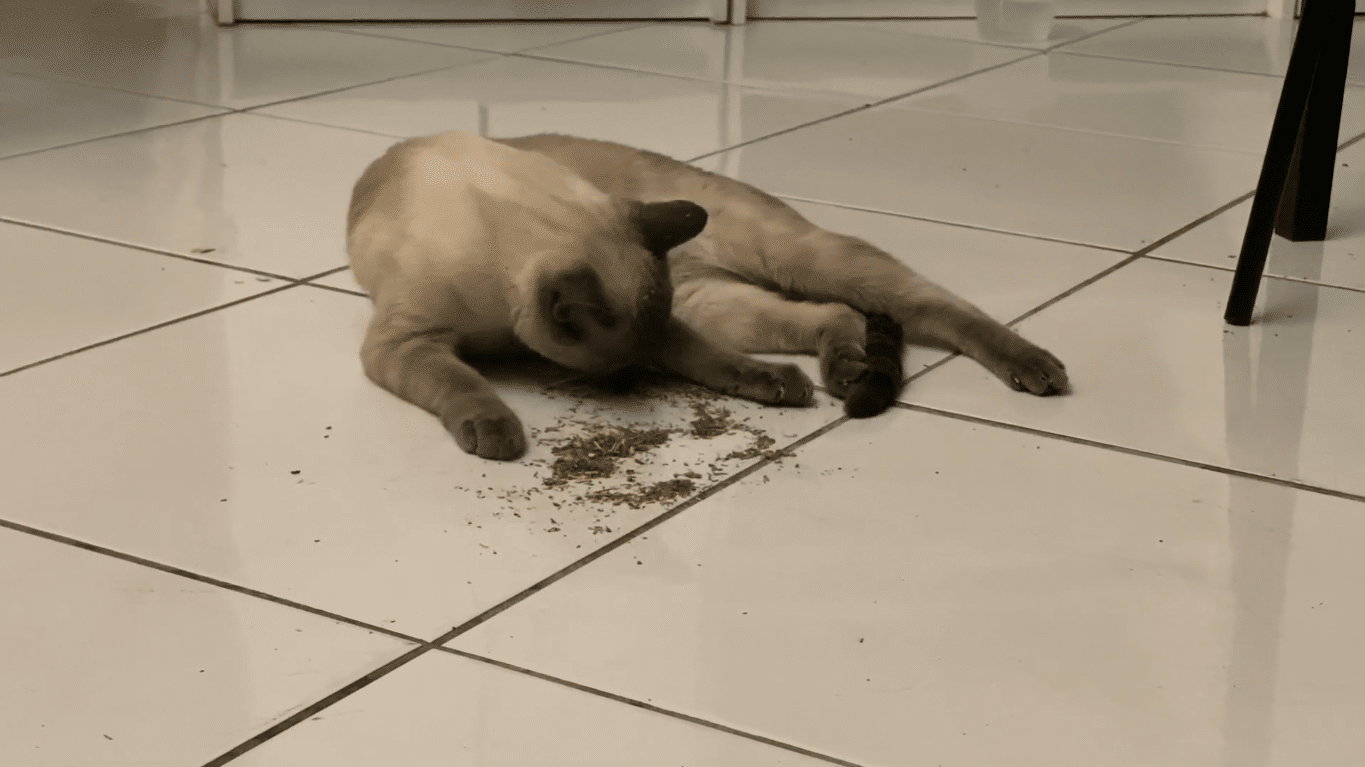 Catnip is an herb that has been used to lure cats for over 2,500 years, according to historical records. When the gray-green foliage is scratched or rubbed, oil is released that cats find irresistible. It’s no wonder that your cat enjoys the herb catnip. The hardy perennial is a favorite of nearly all felines. However, you will soon find that you need more catnip plants than you currently have. Everyone is familiar with the effects of catnip on cats. However, the result can be unexpected at times! There’s nothing wrong with giving your cat a catnip or a catnip toy if you want to. Simply pay attention to how your cat responds and change his or her exposure as required. About 50 percent of Siamese cats like catnip. Usually, we have noticed that Siamese cats have a more euphoric experience with it. And as parents of these enigmatic creatures, we are overjoyed that they do. It’s difficult not to like a simple herb that sends Siamese cats bouncing off the furniture and laughing.

It’s a taster’s pick when it comes to cats’ responses to catnip. A conclusive correlation between a particular breed and a taste for catnip has yet to be found by science. The possible logic behind this finickiness is described in this NCBI report. A hereditary predisposition to the herb has been proposed. However, several educational studies refute this claim. So far, we have no idea why some cats go insane after sniffing catnip, while others do not react at all. Nepetalactone is the active ingredient in catnip (Nepeta cataria). This plant seems to be destined for the feline kingdom! Both the stems and leaves of catnip contain nepetalactone. This unique herb comes from Europe and Asia, and there are over 250 varieties. However, 50 percent of cats will have a strong reaction to it, regardless of where it came from. This reaction appears to be almost hallucinogenic – and the majority of cats we have met seem to enjoy it!

What Happens When a Siamese cat likes Catnip?

The experience that a cat gets after sniffing catnip is difficult to tell. This enchanting herb puts a cat in a euphoric mood when she sniffs it. Siamese will hide her nose in the leaves and spin her head around, trying to get the most satisfaction out of the scent. She’ll then have the delusion that she’s a sprinter at the starting line. When the referee blows the whistle, she starts chasing dreams that only she can see. After sniffing catnip, the eyes of Siamese cat will look prettier than ever. When she needs to relax, all she has to do is eat a little more, and her eyes will glaze over with delight. She might even start drooling. She’s content in her little world. The high lasts about 15 minutes, and she’ll be able to roll again in about two hours if she doesn’t get more.

The key to this fantastical universe is nepetalactone. This is an essential oil found in the catnip plant’s leaves. It triggers a chemical reaction in a cat’s brain that leads to rapture when it’s released. It is believed that when Siamese enjoy a nip from this plant, they just get hallucinated, and then in hallucination, they show their silly side. After all, doesn’t every mammal need to unwind and let off some steam? We all know cats don’t have nearly enough zen experience in their lives. When sniffed, it produces an amusing reaction in the cat’s brain. But when swallowed, it serves as a sedative. And this plant is just as easy to use for cats as it is for humans. Chewing helps your cat break down the leaves, enhancing the effects. But don’t be concerned. While this all might sound like a ride back to the wild sixties, catnip is not a drug. It doesn’t have any addictive properties, but your cat will know how much he enjoys it and will request it again. There’s also no danger of hurting him if you feed him too much or too often. You may have found your cat leaving a single morsel of food in an eating bowl. This is either amazing self-control or instinct, but cats have superior determination.

When to Feed Your Siamese Cat Catnip

When a kitten is two or three months old, he or she develops a taste for catnip. Their senses aren’t yet mature enough to understand the fine qualities before that. You can use catnip as a bribe to pay for your cats. When training your cat or kitten, sprinkle a little, or a lot, on the scratching post. But don’t have any on your costly furniture. You can also give it to her before a visit to the vet, during visits to the vet, or as a reward after she has her claws trimmed.

How to feed Catnip to Siamese?

It comes in a variety of ways for your cat, including shredded leaves in small bags from your local pet shop. Liquid, spray, and still on the plant in your windowsill are some of the other options. You may also have some cute plush toys with catnip pouches.

Cats are crazy about catnip, and it’s not because of the beautiful foliage. Gardeners love the pretty, heart-shaped leaves that grow in an open mound about 3 feet (1 m.) tall. Catnip plants also produce blue flowers throughout the season. Catnip is a truly ornamental plant as a result of this. It’s simple to grow new catnip from cuttings if you or your cat insists on having more plants than you already have. Catnip cutting propagation is as easy as perennial propagation gets. Catnip cuttings may be rooted in water or soil. Catnip is a fantastic place to start if you’ve never tried propagating a plant from cuttings. Leaf-tip cuttings are a simple way to spread them. In the spring or early summer, snip off the tips of new growth making each cut on a slant just below a leaf node. You just have to keep the clipping in nice shape so that you can use them as cuttings. Catnip belongs to the mint tribe, and if you don’t cut it down, it will spread in your garden.

Your Siamese cat will love Catnip. It won’t have any bad effect on a cat’s health but still do not make your feline friend addicted to it. You can feed it as a bribe to properly train her or when she has spent a long day alone at home.