How to Calm a Nervous Cat Kitty? | Siamese Of Cat

How to Calm a Nervous Kitty?

None of us would want to deal with a cat who is angry or nervous. There are a lot of things that can make a cat upset. Few of those include loud noises, car trips, any strangers entering the house, watching the owner-pet another animal or visiting the veterinarian. A nervous kitty would shy away from everyone. They always prefer a quiet environment. Even when you try to approach them in a friendly manner, they would tend to shy away. There are certain signs of a nervous kitty that can you can watch out for.

It is not necessary that every nervous cat would behave in a similar manner. Some of them would have completely different behavior. But irrespective of the way they express their nervousness, it is important for the owner of the cat to understand them and also to calm them down.

It is ok when the cat is nervous or feels scared for a day or two but if this behavior persists for long then it gets stressful both for the cat as well as the owner. It would become difficult to make them friendly or cuddly again. Hence the earlier to understand your cat’s nervous behavior, the better you can make it feel and get them out of nervousness.

Understand the safety of your cat and yourself:

When a cat does not want to go anywhere especially a visit to the vet or car trip then they prefer being left alone rather than being petted. In such cases, if you have to approach a cat who is already agitated is to firstly protect yourself and then the cat. Cats who are scared or nervous may have the tendency to bite or even scratch their owners. This kind of behavior means that the cat is very upset and wants to be left alone. Try to approach your kitty in a calm and composed manner. Try wearing long sleeves when you are approaching them. You can also get a towel handy to hold them in case if they get too agitated.

Calm Behavior is a must:

A calm and soothing voice has the tendency to melt even the hardest of heart. Hence when your cat is nervous, do not force them to do a certain thing or raise your voice. Instead, approach them in a calm manner. Try saying “Sshh, Ssshh, its ok Bubbles, I am here for you, Sshh”. Wait for your cat to calm down with some soothing words. They would gradually understand that you do not mean to hurt them or there is no threat from you. Lower your tone and talk to them. You can also try singing to them for relaxation. Try not to sing too loudly else it may again make them nervous.

Luring your cat with food:

Some nervous kitties would prefer to have good food to calm themselves. Try providing them with wet food which is more appealing instead of dry food. Fish is anytime a better option for a nervous kitty.

Moving the cat to isolation:

In certain cases, placing the cat in a confined location wherein it is alone can also help to calm them down. You can place them in a bathroom or any other room where no one else is there. Once you place your kitty in that room, close all the doors of that area, turn down blinds and drapes of the window. The main aim is to calm down the cat in a non-threatening environment. This can reduce the anxiety level of the cat to a certain extent. Initially, the cat would not come easily with you to the confined space hence you may need to make use of a towel to hold the cat. 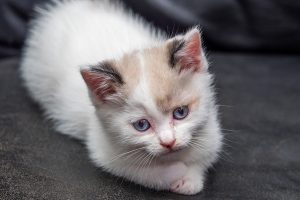 Identify the root cause of its nervousness:

Cats can feel nervous due to some incident that has previously occurred with them. If someone in the house or a stranger misbehaved with the kitty, then the next time you can place your cat in a different room when that person arrives. If it is another pet which is causing the cat to get nervous then you may need to use some technique accordingly for handling those things

Talk to your vet:

If your cat is an extremely nervous kitty which does not calm down easily then you can talk to the vet for sedatives used in the cat. Though these sedatives come with its own list of side effects and precautions. But you should always consult the vet before you give one to the cat else it can cause certain medical conditions. Instead of sedatives, there are certain short-term medications that can be prescribed by your vet if you need for certain occasions such as car trips. Not every cat would react to the medication in a similar manner, hence the vet would suggest to first give a trial dose while the cat is at home to understand its reaction. Certain sedatives prescribed by the vet should be given an hour or soearlier before you travel with the pet  so that the cat does not feel stressed out.

Lastly, it is the natural bonding between the cat and its owners which can help things to settle down. Take it slow with your cat and do not force your cat to understand everything that you say. Nervous cats can behave in a different manner. Hence it is up to the owner on how they can handle such situations. Being calm and composed would help your nervous cat come out of its shell and mingle around.