Why Does My Cat Bite My Nose? 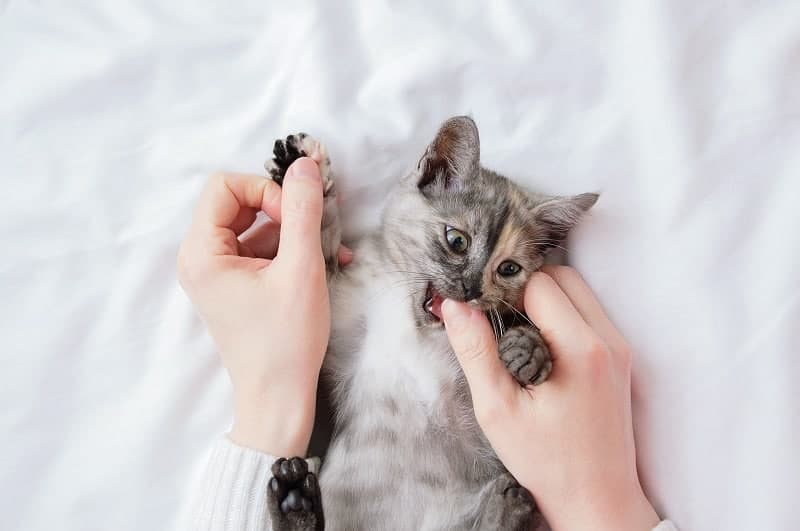 Any cat parent will tell you that we are devoted to our pets, but we may not be so devoted to some of the behaviors they choose to bestow on us. The majority of kitten bites aren’t painful, however, this can change when your cat grows older and begins to bite harder.

“Why does my cat bite my nose?” you might question. ” This is for you since we’ve spent hours scouring the internet for a solution to your question. We’ll answer it, as well as provide ways for teaching your cat not to bite and determining the difference between an intentional bite and a playful nip.

Your cat may bite your nose for a variety of reasons, including transferring her scent to you, identifying you as her property and a member of her territory, or simply as a pacifier substitute, particularly if she was separated from her mother when she was young.

Below are some of the reasons why your cat is biting your nose:

Your cat may be biting your nose because she still hasn’t gotten over her kitten quirks and suffers from separation anxiety as a result of being taken from her mother at a young age. Kittens born to stray mama cats may be ignored if the mother cat is preoccupied with her survival. Biting your nose is a means for your cat to suckle for comfort and as a replacement for a pacifier, exactly like she did as a kitten.

She may be over-stimulated

Another reason your cat may bite your nose is that after a few minutes of caressing and playing with her, she becomes overstimulated. Cats are extremely sensitive, and unrestricted physical touch can be overwhelming. Try to look for these warning signals that it’s time to quit massaging her.

Marking you as her property and part of her territory

Because she can smell their odors on you, your pet kitty’s territorial tendencies may be awakened if you’ve recently added a new pet cat or visited a friend who also has a cat at home. To retaliate, she’ll bite your nose to leave her scent on you, effectively making you her “property” and a part of her territory.

To show love and affection

This form of nose biting and nibbling is your cat’s way of expressing love for you, and it’s even referred to as “love bites” by some people. Cats may also express affection by biting your hair. Cats have a variety of hilarious ways of expressing their affection for you, which vary based on the breed of your cat.

She’s extending her grooming practices to you

Cats are admitted groomers who stress about their grooming routines. If your cat bites your nose, she may be doing so as part of her grooming routine. She could be doing this because she can detect scents in your face, particularly if you’ve just finished eating.

She may be establishing her dominance over you

Your beloved feline may be biting your nose to let you know she’s the boss. It’s her way of letting you know, “Hey, I’m the boss.” Can we now begin to play? If your cat doesn’t back down but instead tries to play with you and cuddles after biting your nose, you can tell she’s displaying “dominance” behavior.

Cats may feel threatened at times, most likely as a result of other cats nearby or other pets and animals they encounter outside. If this is the case, she may take out her frustrations on someone close to her, such as you. This is referred to as displaced aggression by cat experts.

To seek your attention

Cats are inherently playful, and if they don’t have any other cats to play with, they’ll seek you out as a playmate. To pique your interest? Your cat will try to bite and nip at your nose, which she will usually do while you are cuddling her.

You may not realize it, but your cat could be harboring a secret grudge against you. It could be that your routine has changed and you haven’t had much time to play with her recently, or that there has been a lot of activity in the house. If you see this behavior in your cat, put her down immediately and distract her with a toy or a cat treat.

How to curb nose-biting behavior?

While your cat may appear to be amusingly biting your nose, you should not condone this behavior. Here’s what you can do to curb the nose-biting behavior of your pet cat.

You can prevent your cat from biting your nose by providing her with plenty of instruction on how to play properly while she’s still a kitten. If you will scold your kitty when she was young, they will understand that it is not the right way to play or express her love towards you.

At a young age, you should train your cat to play appropriately, and instead of letting your pet cat become accustomed to biting and nipping at your nose and hands, you should use toys and strings during playtime.

Allow your cat to have plenty of exercises

Cats need to release their pent-up energy, which they can do by engaging in play as a kind of exercise. While cats are playful, they also tend to sit and laze around your house most of the day, which can lead to laziness and obesity. You should spend at least a few minutes each day playing with them to build their muscles and allow them to become physically and cognitively alert. Also, if your pet cat becomes too preoccupied with other enjoyable activities to play with, she will most likely forget about biting and nipping.

Your pet cat may be biting your nose for a variety of reasons. She may be doing it to brand you as part of her territory, or simply to capture your attention and show affection because she was separated from her mother at a young age. Whatever the reason, this type of activity should not be encouraged because it may be harmful to you and others as well at home.